Three Dogs and a Penguin, but no Rabbit

There aren't many days right now in my part of the world where I can go outside for a walk as I am listening to a book on Audible or to an interesting podcast.  Since before the holidays, I have been riding  my new recumbent bike instead.   Don't worry, I am not going to tell you how many miles I ride or how many calories I burn because I imagine you don't really care.  But that is okay because I don't want to read in blog land about your exercise routine either unless you shoved your FitBit or step counter or whatever the heck those things are up your arse for some interesting reason.  I can't say that I'd want to know what you did with it while it was up there though, but I do hope you washed it somehow afterwards.  Hand sanitizer, anyone?

So recently, but not today, I was able to go on a walk during a little warm up in the weather.  This past summer and fall I did so much walking that I know where the pain in the neck dogs live .... you know, the ones that come running out at you and their owners say every time "She doesn't bite....blah blah blah....." Yeah, lady, well, what if I bite?

So I learned what times to avoid certain houses based on their dog-running-free-in-the-yard-time.  I adjusted the time I went out recently, but as luck would have it, the same dog with the same stupid owner came rushing out at me again.  I wanted to ask the lady, "Do you live in your yard with your dog ?   How could it be that every time I walk by your house, your dog comes running out at me?  I changed the time of day that  I walk and it still doesn't matter... you know anti-stalking.... when you learn someone's habits and schedules so that you know how to AVOID being in the same place they are, say EVER!"

One more loop around the subdivision and another dog comes charging at me.  Ugh!

And then at the very end of my walk, I saw a penguin.  Impossible you say!  And you're RIGHT!  I gave it a confused, but closer dirty look, and discovered that it was just a small black spot light that someone has on the edge of their lawn....... with some red around it.......   see here is where it gets really ridiculous.  I thought the red was a scarf.   So there is a penguin sitting in someone 's yard wearing a  winter scarf just because it's been mighty cold in my non-indigenous-to-penguins-state this winter?  Pffffttt.  Some stress ridding walk that was -- not!  I left the house stressed and I came home with an imaginary friend penguin.

Then, even more recently, Storm told me that he was out getting our mail when the neighbor's giant dog came charging at him, but Storm acted excited to see him, so the dog became his immediate friend.  The two males sniffed each other........ I mean, the dog sniffed Storm's crotch, he petted him and the dog gave him a body hug.  Then Storm said he started walking back to the house, "But the dog came running after me and shoved his nose in my crack.  And then the dog's lady owner announces from her front yard, "Oh, right up the butt!"  Storm was slightly violated by a canine and now the whole neighborhood hears about it.

I'll take the imaginary penguin over that experience any day.  I don't want a dog's nose or a FitBit or anything else shoved up my butt, especially without my permission! 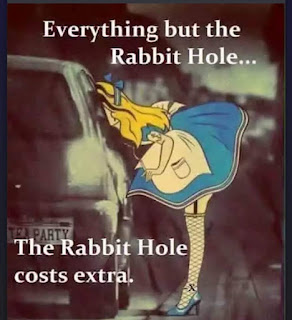