It's not necessarily that we wanted to watch a movie this past Saturday night because it was already getting a bit late for us to start one.  Plus, we can take almost as much time reading the synopses and watching trailers as we can watching an entire doggone movie. As a result, sometimes, we just do searches on lazy nights.

I am pushing the effing button on the remote that will not respond although it's been trying to tell us (STORM!) that it needs to retire because the back battery compartment cover falls off almost every time we even pick the dang thing up.  To be fair, it's probably not its own fault rather that of mine as I dropped it on the hard wood floor so many times, the back compartment pops off and the poor little batteries shoot across the room and take cover somewhere inconvenient for us to find them again.  (Perhaps they'll find Mr. Potato Head's missing wife and child magnet?)  An example of how the remote misbehaves is if I simply want to change the channel  five to channel one.  I have to hit the button ...... nothing happens...... hit again.... nothing..... repeat and then suddenly, I find myself on channel 111111111.  Ugh!

As luck would have it, during this particular movie search, the buttons were indeed giving me a hard time and all of a sudden, Storm goes, "You just hit RENT."   We hadn't even watched the trailer or read the synopsis.  And now, we had no way of doing either of those things because it didn't give us the option.   So we just ended up watching the movie.  I'm not a penny pincher, but I do try to buy things on sale and I do everything that I can to get free shipping, so when our order gets messed up or something like that, it makes me mad because I actually spent a lot of time trying to save 10 bucks.  I had no one else to blame here, except my own self.

Around this time, I also kind of started not feeling well.  My muscles in particular were feeling weak..... not unusual because I am out of shape, but my legs were shaky and I couldn't figure out why.  Yes, I had spent 4 hours in the kitchen, cleaning it, preparing dinner, cooking dinner, making some special carrot fries in the air fryer that takes a long time for the kid's special diet, and then cleaning up the entire kitchen again.  But, why would that make my legs wobbly?  I have anxiety and as per usual with me, at least one person in my life is  giving me something extra to fret over as if I don't already worry myself half to death all on my own.  I imagine that stress causes me various physical issues.  Storm takes care of me and although he isn't worried, he tries to help me out.  So he's thinking and then, "Wait.  Didn't you squat a lot in the shower earlier?  I know when I shave down there, my thighs can get tired."   Ah, yep, he nailed it.  It's like hovering over a public restroom toilet when you have no choice to wait until you get home because the poop is coming either way, and later, you can't figure out why your thigh muscles are sore until you remember your bathroom stall antics.

I just happened to have shaved my snatch in the shower earlier that night.  I used a new razor and conditioner on the recommendation from a friend (*whispers Willie*) who also told me to "shave against the grain." I am over 50, and I cannot see my snatch in the shower to see which way the "grain" grows.  I could feel the annoyance of farmers all across North America shaming me as I stared down into my field of wheat. I needed my reading glasses, but that would not have worked --in a tub, yeah, but not the shower.  So I stood there scraping and scraping away and reapplying the Aussie conditioner and I truly needed a 3 Minute Miracle.  Pffft.  More like a 33 minute hack job and pray it turns out all right.  Besides, we all know it's the Magic Wand that is the true 3 minute miracle worker.

Later, just before bed, we were standing in our room hugging and I asked if I was in trouble for accidentally renting a movie.  I knew the answer, but still, we're on the path to figuring some things out here with our dd so there is a lot of search, discovery, keep, or discard going on in general.  He laughed and said no.  I said, "I would spank you if you rented one on accident, especially if it would have been like 20 bucks!"  He laughs at this because he knows it's true and that will happen when hell freezes over.  He says, "Well, at least it wasn't 60 dollars like that one time we left your dad alone with the remote (before it was broken) and then had to watch professional boxing for the next 6 hours!"  My dad never would have done that on purpose.  Yes, he wanted to watch it, but he did not know that he paid so much to do so.  We weren't mad, he felt bad, but I just decided to spend 6 hours with my dad watching a disgusting sport because it was fun to watch him have fun.

Just before sleepy time, because of my muscle tightness overall, I was stretching using the side of the bed and Storm comes right up behind me and pulls my bubble gum pink pajama bottoms right down to the floor and begins an unofficial, impromptu, and unscheduled examination. Well, hello!  I felt a little manhandled with the spreading and whatnot, but he's getting his Dom on, so I have zero complaints.  I just continued to stretch and laughed at him.  So he's looking back there and says that I did a pretty good job.   I said I gave it a a good effort ........ and just as his face feels inches from my butthole because I did well there, too, I guess, I hear "That's impressive!"   OH MY GOSH.  I died laughing. What was it like back there before, the Rain Forest?  I have no idea, I went by feel.  I'm no farmer, but I guess I do know how to bushwhack!

Like many a man, if his wife has never shaved this close or hasn't in a very long time, Storm wanted to see it again, but this time we had just climbed into bed, the lights are out, except he had his phone in his hand with the flashlight application on.  Oh brother.  "I want to see it closeup," he tells me.  I'm not sure how much closer the man could have gotten earlier, but what he says goes, so there I went.  Me, "Well, why did you turn the lights off then?"   Him, "I want a close up look with a light right on it."  I suddenly fell like Snow White except older and fatter, but there's no cellulite where he was lookin', and that Storm was one of the Dwarfs about to go mining in my cave. Doc, I guess, he'd be. 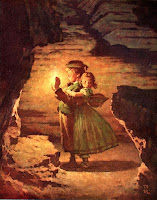 Then my gears shift and I find myself looking around at our blankets in the dark rumpled around the bed and felt like we were kids. "What, are we camping?  We're going to pretend to pitch a tent and read under the blankets?"  He ignored me and went on about his mission like Tom Sawyer looking for trouble or treasure in the cave and I responded like his Becky, "If you see anything scary down there, I don't want to know about it."