Making sense of it all - It takes a Village!

Sometimes I feel that I have so much to say that I don't know where to start and how to finish, so I don't end up writing it.  I just think it...all around it, up and down it, and then don't write anything at all.  But, I have had a few times again recently where something has happened between Storm and me and I think, "Oh that needs to go on my blog!"  So here I go.

The big thing going on here is that we are in discussions regarding how to formally make our ttwd active again.  And that makes me think 12 different things right there, right now, so I have to type like Kermit the Frog and get it all down before I lose it.

Storm and I are doing really well.  We're like the "old us" or the "always us" that we have been for most of our lives.  It feels so good to spend alone time together and we get much more of that than we were getting for the past several years.  It was hard to officially stop the ttwd because we both care about that extra zing (and the swing)  (as in spanking, not swapping partners) that it brings into our marriage.  However, it was wise to do so even though it was hurtful to both of us. We needed to just heal some things and we've done that naturally.  So the thing is, while I miss the ttwd, I do not miss the angst that it caused me/us.  To the best of my memory here on my blog, I have said that it caused much more conflict between us than we had without it.  I would think we were on the same page about rules and spankings and a united front only to find out time and again that we were not.  I'm not going to blame Storm for all of it because obviously I'm being misunderstood or I am misunderstanding myself and who knows what else, but it was very frustrating.  Storm does have a difficult time communicating with others so that does lie on his shoulders more than mine. But it was what it was.  We don't want "what it was" this time around.  We find ourselves negotiating from the very beginning again.

It's hard to know where to go ........ we're most likely going to repeat what was.......... and that makes us both sit back and ask how can we truly make this work for us .......what did we do wrong ....... what did we do right?  What feels right now that didn't then and vice versa?   Do we even need ttwd to be our kinky selves?  Does spanking automatically go with our ttwd?  Can we do ttwd without the dd part? Can the spanking just be part of our "bedroom selves but without role play?  I ain't doing that because it has to feel real to me.  If the spanking doesn't feel real or have a reason, then what is it?

So I called an old pal to have girl talk about it...... her name is Pepper, but you will most likely remember her as Nora Jean.  Laughing.  She's gonna kill me.  But, you all did meet Pepper once over on NJ's blog when she made a saucy role playing appearance at least once.  We know from her blog her and Frank's extensive d/s background and how it's always been a part of their lives.  Then came the dd for them.  Pepper was in there roleplaying somewhere, so I figured NJ might have some insight on how to make sense of this for me.

One thing I found interesting is that she asked me if I had a physical reaction to the spanking or was it all mental?  Because if it's physically stimulating (it is) and bringing in the nerves and the lady bits down there by my arse, then why do I need any other reason than it is stimulating?  I get that, but I don't wanna just go in the bedroom and have Storm whale on me (she wasn't suggesting that, but she did say something about spanking being erotic humiliation, but that is a whole 'nother post - lol)   ...... there has to be a reason or a lead up or something...... doesn't there?  Thus the possibility of role play for some, but it isn't for Storm and me.  So if we go with the mental part of it, that's where the dd comes in and seems like it has to be at the core of it all.   But, we're hesitant to try the dd part again because it's the part that failed us or we failed it.  Before we knew there was even such a thing, we just did our own d/s type stuff in the bedroom.  But, I was never quite sure what that meant and also, I'm not sure I only want to be submissive and spanked within the context of our sex lives.

Okay, ttwd Village.......... what do you think?  Got any ideas about any of the questions we're asking ourselves?

Show me the buttons....... I want to press ALL of them.  #ALLtheButtons!   Mostly it's when I don't get the attention that I know I deserve (spanking), so many times, I have tried to push him just a bit past his boundaries.  And now that we're not doing ttwd.....pfftttt his boundaries are out the window! 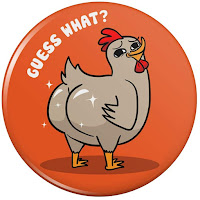 And, heck yes, I mean it when I call him Nancy.  What is he going to do about it?  If he were on to me, he'd do the same thing he would do just as if we were still doing ttwd.  But, we don't have a current agreement, so he probably doesn't feel that he has my consent or ...... I don't know because I didn't ask him.  And I don't inform him that it would be okay with me or I would think it's kinky or whatever because I don't feel like revealing my vulnerability to him in that fashion even though I have done so many, many times in the past.  I just call him Nancy when he takes too long in the bathroom because I can get away with hit.  For now. :)

Lately, I have been more focused on domestic things because I can't do much of my up-cycled furniture in the winter.  I could paint inside and I have, but ya can't paint what ya can't sand first.....so, I am back to having my focus on cooking.  Storm loves this.  He doesn't get mad at me when I don't cook, but when I do, he loves it.  I like to have some sort of creative outlet or expression.  The past few weeks have settled down for me emotionally and I feel rested in that way.  This has been healing for me and it's been healthy for our marriage.  I'm beginning to venture back into vulnerability with Storm and it's a relief to feel it coming naturally.  I don't know if that came first or the cooking did, but I feel more domestic.  It establishes a kind of routine to sit down and eat the meal together that I have prepared for us while the rest of the household is out and about.  I actually have been cooking servings of 3 or 4 instead of just 2 and then sharing them with Storm's mom and another loved one.  Yes, she is out of the hospital and back on track.  She's doing really well.  Let's not talk about whether or not she is going to be vaccinated when her natural immunity runs out.  I can't even.  I have to ignore it and just be a small blessing with the cooking which she very much appreciates and we have a few little texts here and there about that.  Keepin' it simple.

Same with other loved ones who have different political (all) and religious views (some)....... things are just in a cooling down phase for me because I have no fucks left to give when it comes to any of this Trump crap.  I've given much more time and energy to all of that because I love my family, but I can only take so much.  My rule is that they are not allowed to discuss any of it with me. I have put my fingers in my ears and walked away singing, "I'm not listening because I told you I don't want to talk about this with you anymore," like a toddler, and I do not care.  Laughing.  I'm out!!  This has meant that certain family members don't call me as much and vice versa.  While that is hurtful in some ways, it's a relief in others. That is one way with dealing with some of the religious trauma, too. Sometimes one has to physically remove oneself to maintain her boundaries.  I have a lot to say about that, but haven't written it down yet.  I haven't forgotten that some of you may be wondering where I am at with that, so I hope to let you know sometime soon.  And I will try to explain how the political and the religious issues are all wrapped up into one big ball for Evangelicals, so it's hard for me to see them as 2 separate things.

For now, it's about connecting with Storm through cooking for him.  It's interesting that it is bringing some ttwd feelings back to my mind.  I admit that it's the intimacy of the quiet in the kitchen and chopping herbs, spices. and veggies that engages my senses and I remember that it was part of our agreement that I would cook dinner for him as long as I was feeling well enough to do so. This is one of the things that made me feel more submissive and feminine.  No, food does not make me horny, so that is not what I mean. I already wrote a post a long time ago about keeping food out of the bedroom and keeping crumbs out of Storm's bed........ oh, unless I want to push his buttons, I might have to eat some goldfish (the crackers, not the pets, you sickos) on his side of the bed.  #AllTheButtons