How Sub Can You Go?

Submissive Writing Prompt #1    When did you first realise you had submissive feelings and how far have you embraced those feelings? 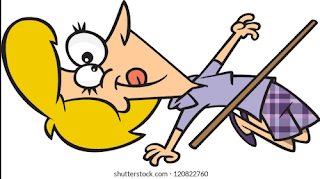 Theoretical scenario:  If I am smarting off or being impatient with my husband, and then he spanks me, but then I just go on fairly soon back to the same behavior, doesn't  that mean that whatever we're doing isn't working?  If this dd thing is working for the reasons we set it up to be, I would think I would be getting less spankings...... wouldn't I?  *Looks around*  Wouldn't you?
Of course, this brings out the obvious: that many of us are spankos. But, are we specifically choosing dd (and sometimes calling it ttwd) so that there are almost always spankings?  How can spanking be both the punishment and the reward?  I think this has been part of my own internal struggle.  For those of us who have things other than spanking or in addition to it that we desire and/or that "pushes our yummy buttons," I still ask the same question.  How can action by the dominant partner be administered and then received by the submissive as both the punishment and the reward?
I understand that some have their dynamic set up where there is such thing as a reward type spanking.  But, for me, it can never be a reward because that doesn't fit in my ideal headspace.  It would fit nicely in the D/s area just like it used for me before I stumbled upon an area of opinion on the internet and led me into thinking classic dd was the only way to have the spanking thing work as discipline.  Looking back over my blogging years, I was and still am wanting to explore my submissiveness, but I was sometimes embarrassed around others (virtually) by that label because I learned not every wife associates spanking with submission (although I don't see how that is even possible unless it's only "play.")  Obviously dd is a label, too, but it was the very one that many of us were trying to find our place in, so there was a community that seemed to accept mainly that.
It's my own fault for feeling influenced by statements such as, "My partner would never hurt me (punish).  Spank me, yes."  Huh?  First of all, semantics.  Second, if the spanking doesn't hurt, then no wonder why we keep going back to it.  We aren't intimidated by it.  It isn't a deterrent.  Because it's a kink?  Apparently one that is more about the idea of spanking, being told to bend over, and a bit of the feels of the physical impact sometimes followed by sex, which is fine, but for some of us it is not the complete answer.
Even if it truly hurts enough or is just slightly more than one prefers, overall it still seems like a rewarding situation.  Or could it simply be the cycle of being disciplined for reasons established ahead of time, accepting one's punishment, and then cashing in the rewards of the whole dynamic?  If spanking is NOT a kink for you, then that is or can be a whole different ball game with a new set of rules.  I think.
In his book, Spank Her!, the late great Devlin O'Neil offers some insight:

"There might be a girl who needs very much to be spanked, but who would never ask for such a thing. She may, however, go to great lengths to find a man who can satisfy that need, and then do whatever it takes to let him know what she requires. These are often girls who give themselves to one man only, and then only when he proves he will come and get her, then do whatever is necessary to sort her out. This girl desperately needs boundaries, and at the same time she will fight desperately against having any such boundaries imposed. Only when this man has shown her, usually by spanking her bottom hard and making her listen to him when he tells her that she has no choice but to accept the boundaries he thinks best for her, will she accept that he is in charge and come to him fully. She accepts this change of attitude gratefully, if not always graciously, but is the sort of girl who easily forgets the lessons of the past, so that he must repeat them often. She does not forget these lessons because she is stupid, but because it is too easy for feelings of insecurity to cloud her judgment, for her to lose that sense of his presence if she is not actually in his arms or across his lap, and for her to want to push the boundaries again, just to see if he is still there to..."

Hmm.  I think there are many angles to look at this.  What's your angle?  Please share with me.

Some like it just barely browned and still slightly soft.  Others like it evenly browned and a little crunchy.  Still others like it very brown and quite hard.  And lastly, there are a few of us who like it partially burned so that it scrapes the roof of our mouths with that slightly bitter blackness sweetened with just the right amount of butter (not the fake stuff!)  There are always crumbs......... sometimes it's soft, scratchy, light, dark, patterned, half done, overdone....... By now your mind is either way in the gutter and you're wondering what sick thing Windy has discovered and  you're looking up "toast" to see what ridiculously disgusting thing the Urban Dictionary has said it is...... or you just know that I am talking about simple toast!  Okay, I just looked it up myself and was surprised to find nothing disgusting and actually one definition of toast is "a very hot guy."  Hmm, Storm is toast.  Yumm.

Some people like to give you just the crumbs.... ever had one of those relationships?  Pfft.  We get  burned out like toast that we've pushed down too many times to get it just right, but we left it in there way too long.   Right in the garbage that goes!   I bet the garbage's most common food is burnt toast.  Unless your mom was like mine and we'd smell the burn and hear the near frantic scritch scratch, scrape and she's standing over the sink with the toast and a darkened knife until the toast is a little less black but looks biffed and battered and frankly, like someone took a lit 60 grit sandpaper to it.  Apparently my mom never outgrew this habit because when my daughter was little, my mom gave her a piece of toast like that and she said, "Gwamaw, this toast is dirty!"  Obviously, we kept the toaster on "light" at our house.

Ever have somebody change the setting on the toaster and then it gets burned or not done enough so you press it out down for the 2nd time and it ends up burned even though you're standing right there watching it?  The problem is you were thinking about something else so you didn't notice until you started smelling the bitter burn!
I know the popular phrase, "your ass is grass"......... but, if you're a D/s wife, it's more likely your ass is toast.  But, unlike toast, your ass does go back to the way it was:  all fresh with no pink and ready to be made toasty again!
This post was inspired by the phrase, "I’m afraid that there is no cure for burnout. After all, you can’t untoast toast."  -- Ella Dawson
How do you like your toast and are you feeling like someone has pushed you down one too many times in the toaster?
10 comments: