The Precarious Bridge of Uncertainty

The last bridge I can remember standing on as a teenager was a railroad bridge.  I was with adults and I couldn't believe they lead us up some kind of metal lattice tower of steps a hundred feet up in the air. Then they walked across these oily wooden planks that ran under and along tracks, a dizzying world visible below through the cracks.  What were we doing here? Was this even legal?  DO NOT LOOK DOWN.  Who wants to take this kind of risk? I felt dizzy, shaky, and like I didn't trust anyone around me lest they run into me and push me off the ledge either by accident or.... Wait!  Am I on a bridge and afraid of heights, or have I just found myself in my very first BDSM chatroom? 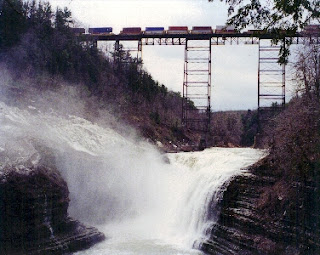 I glance at the first two screen names of who has entered the room so far. Well, fuckbunny16 and her Dominant 16TimesADay seem nice and well suited, and uhhm, prompt anyway. Gosh, what am I doing here?  I swallow hard.  I'm here to learn, I remind myself.   Don't be scared.  DO NOT LOOK DOWN.  And then I go against my own orders and look down at my vanilla name and that of my partner and I feel like the most vanilla-ist sub that has ever vanilla'd.  I'm as  naked as store brand vanilla ice cream with no chocolate sauce, sprinkles, or nuts.  But then I remind myself that certainly about half of us here love a certain kind of nuts especially if they're a bit lopsided and come swinging in a kiwi looking sack and are attached between the legs of our Doms.   Yeah, I'm in the right place.

The thing is, I'm truly trying not to look down and by that I mean I'm not looking down on anyone even if do feel a bit shaky and intimidated.  I try not to judge.  I don't want to be judged.  Been there done that, walked that emotional bridge, and burned it down on my way out. Eventually a little focus in the group comes around to me because I have asked a few tentative questions here and there and thrown in half a dozen sincere LOL's.  The group's sense of humor is the very first thing that puts me at ease.  I find the answers interesting.  And I don't wonder if anyone is lying, but I do wonder if they know what they're talking about because the last time I trusted someone when I was new to the environment.......eh. I get a little dizzy.  And even if they DO know what they're talking about, is anyone going to present themselves as knowing it all?  Because last time ........... eh. The memories are painful and I swallow thickly as I blink back a tear.  But, I keep going, and  I watch a little more, read back what I have missed, get every sub mixed up with their partners so I'm constantly having to double check if I am talking to a sub or dom or a man or a woman.  Subs often acknowledge their Doms in some way so that helps me assimilate.

I don't want anybody to push me off the ledge and so far that hasn't happened, which is good because it took a lot for me to openly cross over to the WordPress Blogs bridge and I'm still a bit surprised I made it here for more than just a few minutes at a time.  Before the chat, I had looked around.  The buttons, my God, the rectangular buttons and the drop downs and the links and the writing prompts. I'm learning and treading the hyper-planks click by click.  Time for the chat.

I have been in other chatrooms in my life where the tension and competition is palpable and even a novice can see the patterns of who is siding with whom, who is leading, who is quiet, who might be a bit snarky, who is the one seeking the most attention when the first words on her lips after this meeting will be who she thinks the attention whore is......when the poor gal isn't that at all.  And what an awful term. And that was the vanilla internet almost 20 years ago. Sometimes even plain old vanilla is toxic. But that is not happening here.  Whew.

I wonder how I'm being perceived.  I'm coming in with a spanking background, a little bit of D/s mixed in with DD, and a monogamous relationship with my partner of 3 decades.  Old to some maybe, but I don't feel old enough to where that bothers me much just yet.  I myself appreciate mature seasoned couples and organically lean towards them to inexperienced young chickens. Mostly I want to represent well.  And by that, I suppose I mean Domestic Discipline even though our dynamic is not simply that nor exactly that, and much more (or less) than that depending on how one looks at it or practices it themselves.

Above all, I don't want to be stereotyped because while I might be in part a spanko, I'm not purely that.  We don't practice DD in a way that makes us feel like we live in the era of Madmen when women were fighting for our rights while others were getting their grandchildren's hands stuck in a washtub wringer because the little one said she wanted to "help."  All I have to do is turn on the news for less than one 24 hour news cycle to see that many folks want to throw us women back half a century at least.  Believe it or not, I was writing this paragraph just before I heard about the SCOTUS draft in the United States regarding women's rights in Roe v. Wade.  Ugh.

My partner and I are not weekend ass slappers and I know this because we spank on Wednesday nights as well.  Laughing.  And I know that term because I have a kinky friend or two who have been around the BDSM block, and probably tied to the block, and displayed across the block.......Anyway, we have more than one kind of paddle, one of which we rarely use and I named it THUD. We do more than spanking and I often have more than just a freshly spanked pink/red ass.  I'm not sure a session with the Loopy Johnny is even considered a spanking and may send a few running..... but, I can't explain all that and more in a few group chats let alone my first.  I don't have all the answers to what DD is for everybody, but I enjoy sharing what it is and isn't for us and I am eager to discover all the delicious and connective things that my husband and I might be able to add to our dynamic.

But I've got to cross that D/s bridge of uncertainty and vulnerability if I want any answers -- what's on the other side and what develops as I walk one plank at a time in search of a deeper understanding of myself as a woman, a sub, and of my partner (and he of himself). It doesn't matter whether it's considered DD, D/s, TTWD, or AthruZ.   Along the way, I hope to discover more about myself as a friend to others who may or may not do many of the things that I do and vice versa, but who empathizes and lifts other women up instead of tearing them down.  There may be hurt and dishonesty that await me somewhere out there in my future, but I'll cross that bridge when I come to it and I'm willing to take the risk.